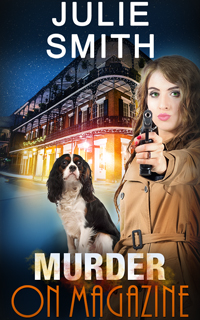 Julie Smith is the award-winning author of twenty novels and as many short stories. She’s a former reporter for the New Orleans Times-Picayune and the San Francisco Chronicle, as well as a veteran of her own online writing school, plus an editorial service she founded with two other writers. She’s also taught writing at the University of New Orleans and in numerous private seminars. During her long career as a novelist, she has created four mystery series, including two set in New Orleans where she lives, featuring homicide detective Skip Langdon and poet/P.I. Talba Wallis. In 1991, she won the prestigious Edgar Allan Poe Award for Best Novel.

Four years ago, she founded the online publisher booksBnimble ( www.booksbnimble.com ), beginning with just four books by four authors who were also friends. She later got her rights back and added her own twenty-odd mysteries, plus many other authors and series. In its third year, booksBnimble achieved the singular honor of having a book nominated for a Digital Book Award.

As a publisher, author, and writing teacher, Julie has a deep commitment to helping new authors. See the FREE STUFF page for a pdf on first chapters and THE PROSE NAZI video below.

Counting all the novels, all the stories in all the anthologies, the odd essay, and a progressive novel or so, her publishers include just about every big publisher– Ballantine, St. Martin’s, Tor, Walker & Company, Knopf, Doubleday, Avon, Harper-Collins, Berkley, Warner, and Oxford University Press– plus some smaller ones, including Akashic Books, Carrol&Graf, Allen &Unwin, Taplinger, and Four Star.

JULIE AND BOOKSBNIMBLE IN THE NEWS

Award Winning Author Julie Smith: A Look at Her Journey From Reporter, to Novelist, to Publisher